The International Committee of the Red Cross has evacuated ten persons injured in Monguno following an attack on Tuesday night…. 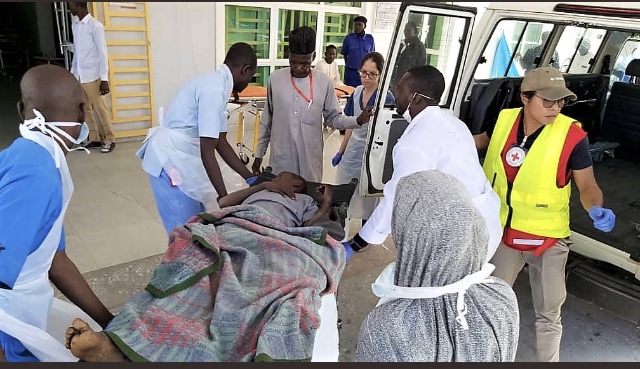 The International Committee of the Red Cross has evacuated ten persons injured in Monguno following an attack on Tuesday night.

ICRCs Head of Delegation, Eloi Fillion
said while five of the patients were evacuated by air, the other five were taken to Maiduguri by road.
“After decades of ICRC Service, I am always heartbroken to see women and children among the patients; Civilians pay the price of the conflict much too often.” Fillion stated.
He further said ICRC surgeons are currently operating the most critically wounded from last Tuesday’s attack on Monguno.
Sources in Monguno have confirmed that Nigerian troops repelled Boko Haram atracks in a deadly clash in Monguno Local Government Area on Tuesday.

Monguno has continued to be targeted for attacks by the ISWAP militants, with the abduction of two female aid workers in a pre-Christmas attack.

The attack was successfully repelled according to sources, after the arrival of re-enforcement with casualties on both sides.

The military is yet to give details of the attack, but the ICRC said it is already administering treatments on civilians caught in the crossfire.