Opinion: “In politics you can change friends like underwear”-Kumangar 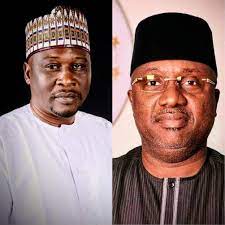 By Blessing Tunoh-Asso
The Director General of Governor Ahmadu Fintri’s Media team, Mr. Solomon Kumangar on Tuesday shared a new article about political alignments as a build up to the 2023 elections.
The article titled “In Adamawa Politics there are no permanent friends and no permanent enemies” gleefully celebrates a picture of governor Fintri and his predecessor Umaru Bindow in a mosque in Yola.
Kumangar, recently appointed as a Permanent Secretary said despite media banters with rival groups “there Are indeed No Permanent Friends and No Permanent Enemies in Adamawa Politics”.
The DG media’s article explains that the picture of Governor Fintiri and his predecessor, Umaru Bindow, validates the famous saying.
In the article, the DG says his boss and the immediate past governor are enjoying a mutually beneficial relationship.
“Seeing the Governor and his predecessor holding hands and laughing to the public’s chagrin shows that both leaders know they are not enemies but friends with a common interest in Governing Adamawa state.” The article reads.
“Permanent interests” in this case means – you scratch my back, I scratch yours – we tame the itch and stop fidgeting.”
“In politics, friendship is as easy as ABC. You can change them (friends) like underwear without having a bath, and it is just okay.”
The article also justifies the recent outbursts by the governor’s media directorate on his critics arguing that no spokesman of any government is hired to keep silent as such Fintri’s aides should be free to lash at individuals in defense of their principal.
This is coming on the heels of public condemnation of the weaponisation of the Adamawa state government’s media office against critics and perceived oppositions, but the article affirms that as strictly professional.