The Federal Road Safety Corps, Adamawa state command has Wednesday flagged off its 2020 ember months awareness campaign with a… 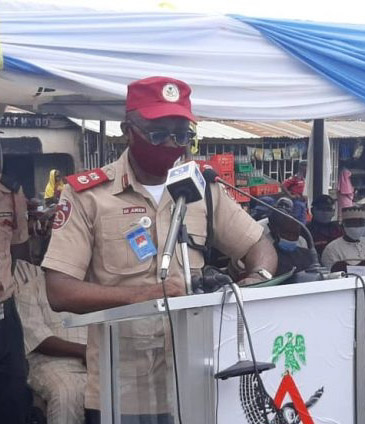 The Federal Road Safety Corps, Adamawa state command has Wednesday flagged off its 2020 ember months awareness campaign with a view to preventing the high rate of accidents and fatalities that has become prevalent in the season.

The sector commander, Ocheja Ameh while addressing stakeholders in the transport industry at the Yola town motor park said the exercise was meant to ensure a considerable reduction of accident and fatalities in the state to its nearest minimum.

With the theme “Drive Safe, Stay Safe” the 2020 exercise is targeting a reduction of up to 15 percent in road accidents and fatalities in the state.

The sector commander noted that significant attention will be paid on overloading, driving with worn out tyres, over speeding, dangerous driving, and usage of phones while driving among other causes of road crashes.

He said the command has concluded arrangements to take the ember campaign to mosques, churches, motor parks and other public spaces to sensitize the populace against the menace of dangerous driving and other harmful practices.

With COVID-19 being an active threat to humanity, Ameh said they will also take awareness campaigns to schools with a view to curtailing the spread of the disease.

He thanked the military, the police and other paramilitary organizations for the support they have been rendering to the corps in pursuit of its constitutional duties.

He also thanked the Corp Marshall of FRSC Dr. Boboye Oyeyemi for the purposeful leadership he is giving which led to the milestones being recorded by the organization

Commenting, governor Ahmadu Umaru Fintiri said he will continue to collaborate with the corp to prevent road crashes in the state.

The governor who was represented by the commissioner of transportation, Hon Jika Mustapha lauded FRSC for the monumental feats it is recording in the state and vows to maintain the tempo of corporation with the organization.