President Muhammadu Buhari Thursday in Maiduguri, Borno State, assured citizens of the Federal Government’s presence in fighting terrorism to the… 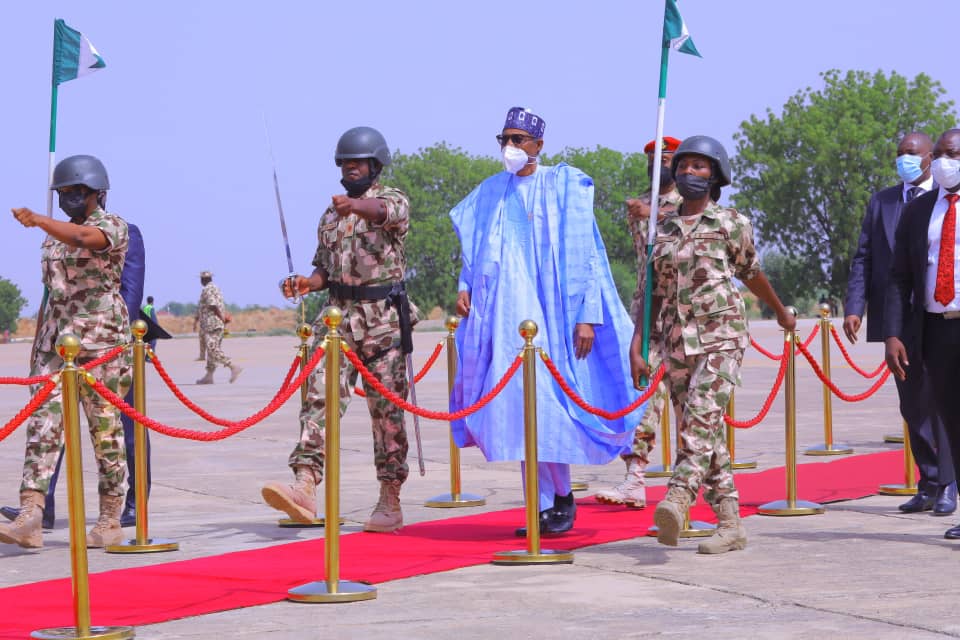 President Buhari, on official visit to the State to appraise the security situation and commission some development projects, attributed recent successes recorded by the military against insurgents and terrorists at Dikwa, Damboa and Gwoza to careful planning, infusion of new equipment and other war materials as well as quality military leadership. 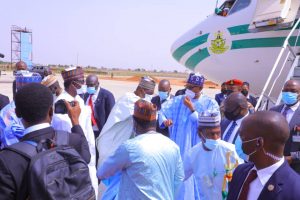 “I am very happy to be here in Borno State once again. I consider Maiduguri and Borno State to be my home since this is the place where I cut my administrative and political teeth, when I first arrived here as Military Governor 46 years ago.

“While I am happy to return home, I am not happy that this visit is not a normal, peacetime home-coming. I am here today first and foremost to appraise the security situation in Borno State and the North East region in order to move full speed ahead and conclude the work of restoring permanent peace to the region.

“The attacks launched by cowardly terrorists against military and civilian targets last month and in previous months were a pointer to us that the work of defeating insurgency and terrorism and of restoring permanent peace to this region is not yet over.

“We will not rest until all the millions of Internally Displaced Persons are able to return and resettle in their homes and rebuild their shattered lives,” he said. 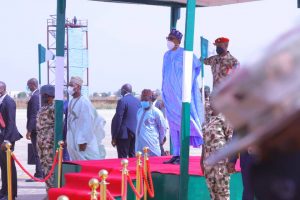 The President said all the Service Chiefs that were appointed this year either served as Theatre Commanders or were part of the command’s operations at one time or the other.

“All of them are therefore personally familiar with the challenge of insurgency. I fully expect them to bring this wealth of personal experience to bear as we move to end this scourge once and for all.

“No doubt, these successes owe a lot to the role played by volunteers of the Civilian JTF, hunters and vigilantes. These good people include women, who are making huge sacrifices and patriotic contributions to our peace-restoration efforts,” he added.

The President noted that many servicemen and women as well as youthful volunteers had paid the supreme price in the fight to rid our communities and our country of terrorism and insurgency, appreciating their gallantry and their sacrifices.

He assured their loved ones that the sacrifices will not be in vain.

“I must also acknowledge the very important role and the sacrifices made by parents, guardians and other loved ones amongst the people of Borno State, the North East region and the country as a whole, who support their sons, daughters, husbands, brothers and sisters in going to battlefields to defend Nigeria’s sovereignty, territorial integrity and its peace. I thank and commend them for their resilience and assure them success is in sight.

“It was a mark of our appreciation for this sacrifice made by Borno State’s volunteers that the Nigerian Army was authorised to enlist hundreds of volunteers from Borno State into the Army. I urge the people of Borno State, the North East region and Nigeria as a whole to sustain this cooperation with the military and the other security services. Both must see each other as being on one side in order for us to succeed,” he said.

The President said the late President Idris Deby of Chad played a major role in the fight against terrorism in the Lake Chad region, urging his successors to work hard in restoring democracy to the country and support the processes of bringing peace to the region.

President Buhari said the recent appointment of Ambassador Babagana Kingibe, an illustrious son of Borno State, as Special Envoy to Chad and the Lake Chad Basin was intended to accelerate the restoration of democratic stability in Chad Republic and enhance cooperation among all the countries of the Lake Chad Basin.

“Let me also assure the people of Borno and the North East that we have taken decisive measures to safeguard IDPs and refugees who recently returned from Cameroon and Niger Republic. They are engaged in the task of rebuilding their communities after more than a decade of war and terrorism.

“It was part of these measures that I gave approval for the Federal Government to build 10,000 resettlement homes in Borno State. 4,000 of these homes have already been completed. Furthermore, I approved for constant release of food intervention by Nigerian Customs Service and the North East Development Commission in order to support displaced persons.

“I have directed these agencies to sustain and deepen this support. I also wish to specially commend His Excellency Governor Babagana Umara Zulum for his tireless efforts in directly supervising the distribution of food and economic empowerment to IDPs in all Local Government Areas,” President Buhari said.

The President noted that the effort at alleviating the suffering of displaced communities will hamper the evil attempts of terrorists and insurgents to recruit fighters and spies from IDPs and other vulnerable populations through the use of paltry material incentives.

On electricity supply, President Buhari said the administration will continue to make concerted efforts towards guaranteeing energy security to all populace across the nation and Maiduguri cannot, and will not be left out.

The President said Nigerian National Petroleum Corporation had been directed to expedite the delivery of 50MW power plant in order to ensure the prompt restoration of electricity to Maiduguri and its environs.

“Furthermore, in the light of the current improvement of security in the state, I have also issued directives for the immediate resumption of Oil & Gas exploration activities in the Lake Chad basin. This is part of our overall effort to restore the state back to normalcy.

“One episode we will never forget in our lives was last year’s cowardly attack on defenceless rice farmers in Zabarmari community. I have directed the Theatre Command of Operation HADIN KAI and other security agencies to work out modalities together with Borno State Government and associations of farmers, on ways to improve safe access by farmers to their farms, forests and fishing grounds.

“I have also directed the Nigeria Security and Civil Defence Corps to accord special support by deploying more agro rangers, through collaboration with Borno State Government, to secure additional farmlands. I highly commend the Borno State Government for its initiative in deploying the agro rangers. We will extend to it our full support,” he added.

“I have gone round to commission some of the capital projects executed by Governor Zulum in two years. I am very happy with what I saw. The Vocational Training Institute at Muna, in particular, is a very dynamic answer to skills acquisition and job creation efforts. Such an effort will ensure that in future, there will be no store of unemployed young minds for terrorists and insurgents to recruit from.

“I was exceedingly happy to commission very laudable capital projects executed at the Borno State University. It is the best answer that the decade-long effort of insurgents to disrupt and destroy modern education in this region has come to naught. I have directed the Federal Ministry of Health to liaise with Borno State Government and accord the needed support to the ongoing construction of Borno State University Teaching Hospital in the areas of equipment and personnel.

“Finally, let me, from the bottom of my heart and on behalf of the Federal Government and the people of Nigeria, commend His Royal Highness the Shehu of Borno, as well as all the other Royal Highnesses and Bulamas at all levels for their very exemplary leadership, patience, determination and wisdom during this past decade when this land was ravaged by insurgency and terrorism.”

The President said the fact that Royal Highnesses now operate from their domains was evidence that peace was being restored to the communities, despite the challenges that remain to be overcome.

“The elders, statesmen, Muslim and Christian community leaders all over this state and region also deserve our thanks and warm appreciation for their resilience, moral leadership and support for the Federal and State Governments during these trying times.

“I wish to reassure Your Highness the Shehu, all the Royal Highnesses, elders, the Government and people of Borno State and the North East region, of Federal Government’s relentless determination in the search for peace in Borno, the Northeast and the rest of Nigeria. We will never rest until peace is fully restored and all displaced persons are resettled in their home communities.

“I will never forget in my life that during my career as a politician, Borno State is where I got the highest percentage of votes, more than 90 percent! The least I can do for you is to continue the relentless effort to fully restore peace to this state, the North East region and the country as a whole,” he added.

In his remarks, Governor Zulum thanked the President for the relative peace enjoyed in the State, buoyed by the heavy presence of military and security men who have been engaging the terrorists.

“We have witnessed gradual return of peace to Borno State and it is our sincere hope that insurgency will soon be brought to an end,” he said.

The Governor said he had already spent 750 days in office, appreciating the President for various developmental interventions, which includes infrastructure, particularly the approval of 10,000 units of housing for IDPs of which 4,000 had been completed.

The Governor thanked the President for approval of a Federal Polytechnic in Mongonu after forty years of creation, 1976, urging more security presence so that farmers can return to their major occupation.