People’s Democratic Party chieftain, Dr. Umar Ardo has been recognized as a true champion of democracy in Nigeria by thirty… 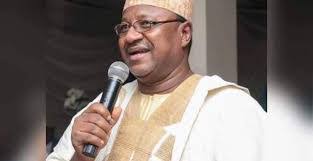 People’s Democratic Party chieftain, Dr. Umar Ardo has been recognized as a true champion of democracy in Nigeria by thirty political parties.

The political parties Wednesday poured encomiums on Dr. Umar Ardo saying that he is one of Nigeria’s rarest patriots, a respecter of rule of law.

Spokesman of the chairmen of the 30 political parties in Adamawa State, Comrade Ja’afar Baba Gire noted that they were prodded by the exemplary conduct, indefatigable comportment, and high level of discipline exhibited by Ardo since the advent of democracy to extend such deserved honor on him.

Gire noted that Ardo remained the only politician who over the years ensured that internal party democracy is entrenched in our political psyche.

” We are all living witnesses to the systematic collapse of democratic values in our political parties. In our opinion, there is one fundamental element missing in our party system, which is responsible for the poor governance and under-development of our state and our country today.

” And until this issue is considered and resolved, party politics will never be stable in Nigeria, and democracy will not serve its purpose of developing this country.

” This missing element is the lack of Internal Democracy. I am sure we all know that the democratic maturity of a political party is measured by the level of its internal democracy, which comprises two key characteristics;-

” Their entrenchment in party electoral process automatically vests all powers in the hands of the people at all levels of the party organs.

” The central benefit of this is the widening and entrenching of participatory democracy, while also guaranteeing fairness, level-playing field and justice to all its members and aspirants in all manner of elections within the party.

” Also, given the fact that the right to vote and be voted for in a political party is an inalienable right of a member, the entrenchment of internal democracy guarantees the exercise of this right to all members.

” This naturally reduces friction and conflict and creates harmony and amity within the party that will help it capture and retain the support and confidence of the people, and thence give rise to good governance at the higher level in the polity.

” Conversely, where these elements are lacking, there will be no democracy; instead, there will be anarchy – the central problem facing virtually all political parties in Nigeria today,” Gire said.

He noted that over the years, this noble ethos was shunned by politicians who in their quest to get power at all cost resort to self-help and all manner of sharp practices.

Gire however noted that for the good of democracy, Ardo has over the years stoutly fought such dark forces and their shenanigans in the process expending a huge financial chest and significant man-hour.

” Ladies and gentlemen, I took time to elaborate on this issue of internal democracy because of its significance in party politics. As we earlier said, until this issue is resolved our democracy will not work.

” It is in recognition of this fact that we call for this press conference to appreciate, and pay tribute to, one politician, and an academic, who perceptively understood this problem and has been fighting doggedly to solve it in his political party.

” And this individual is Dr. Umar Ardo of the Peoples Democratic Party (PDP). Although we are not of the same party as him, we all could not fail to notice his fight for the entrenchment of internal democracy in his party for over 12 years running.

” He fought it at the party level, from state to national; he fought it at the courts, from High Courts way up to the Supreme Court, expending hundreds of millions of his hard-earned money. We admit that he is yet to prevail, but he still has not given up and is determined not to give up till he prevails.

” Even though he likes to describe himself as a politician, most people are Dr. Umar Ardo more of a political activist. His candor and plain speaking, no matter whose ox is gored; his decisiveness and actions when the need arises; his rather forceful arguments and decisions once he is clear of what is at stake – all set him apart from ordinary politicians in the state and the country distinctively and amply.

” Unlike most politicians, Ardo never refrained from conflict when he believes that an issue must be resolved. Again, unlike most politicians in the state whose source of wealth is not unconnected to the public treasury, Dr. Ardo cannot be said to have ever made any money from the public treasury, even though he served at the highest office in the country – the Presidential Villa! Every kobo Dr. Ardo ever made is earned and not stolen.

” How many of our so-called politicians in the state can boast of legitimately earning their money outside government treasury? This is a challenge we are throwing out to them all.

” A man like this needs support and encouragement from all well-meaning Nigerians because when he ultimately wins, it will be to the benefit of all,” he said.