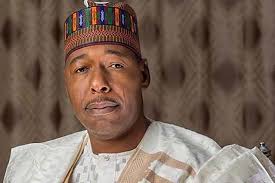 Zulum left Maiduguri on Monday afternoon to Northern Borno in continuation of food distribution he commenced early this month.

He left with journalists and the state palliative committee to undertake the task with the intention of completing it before the Eid celebration.

Boko Haram insurgents are the prime suspects for the attack.

“He is unhurt and is back to Monguno to continue his distribution of relief materials to internally Displaced Persons.” A source in the convoy revealed.

During his last tour in northern Borno, Marte to be specific, military bomb sweepers discovered and detonated landmines laced on the governor’s path ahead of his arrival.

It is not clear if the landmines were targeted at the governor as the military said it was a reoccurring trend, impeding on operational mobility.

Details of today’s attack is still sketchy as there is no mobile network in Monguno where the governor will pass the night.