Unarguably the youngest to have come on board the NBBF, Suraj Yusuf, who represent the North West zone, in this… 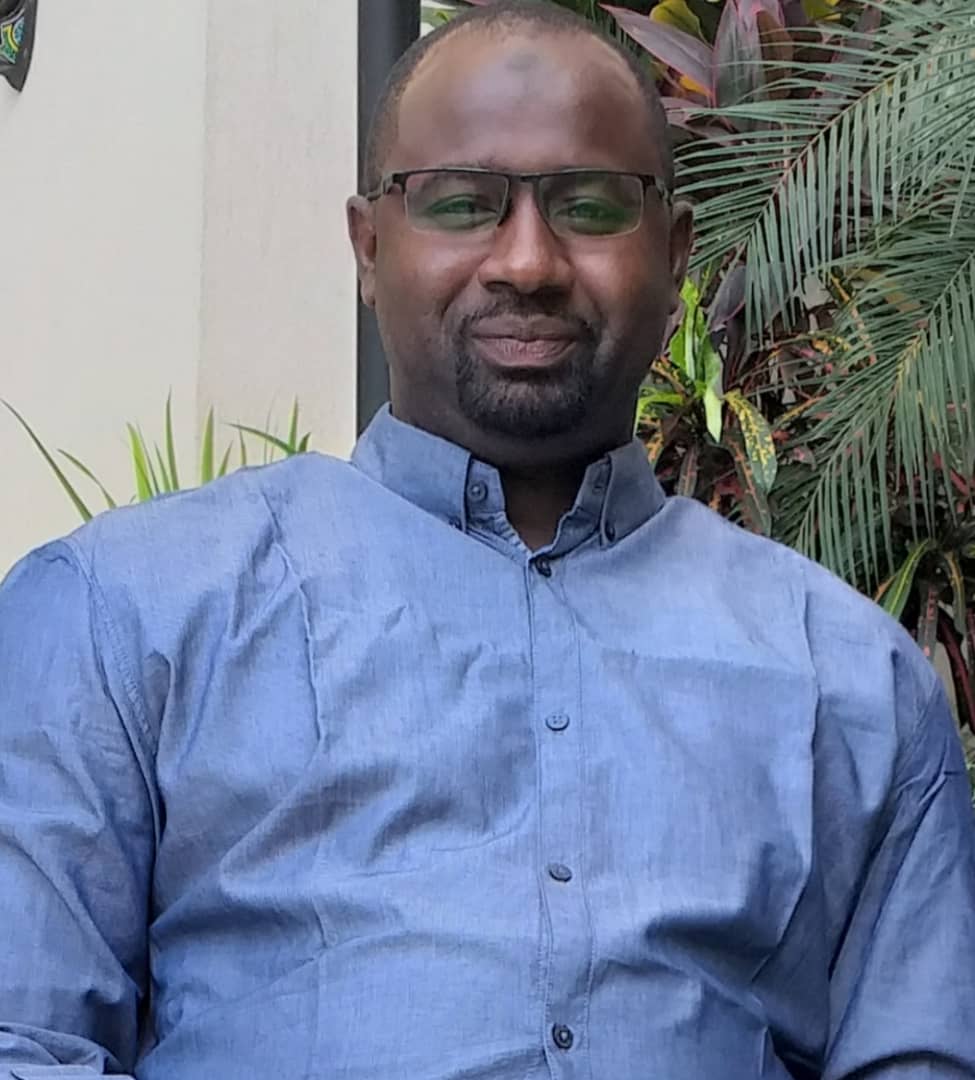 Unarguably the youngest to have come on board the NBBF, Suraj Yusuf, who represent the North West zone, in this exclusive interview with our correspondent, is optimistic of podium appearance by Nigeria D’Tigers and D’Tigress basketball teams at Tokyo Olympics as an icing on the achievements of the Engineer Musa Kida led board.

A. I am Suraj Yusuf, I represented the North West zone on the immediate past NBBF board. I started playing basketball in Sokoto state and I am a proud product of the Milo sponsored Secondary School Basketball Competition where I was among the fifteen selected players to be sponsored abroad by IGI and participate at the world inter-secondary schools basketball competition in 1999. We were camped in Lagos State for a month and underwent intensive preparations to do Nigeria proud but unfortunately, the trip was botched.

Undeterred, I continued playing basketball alongside my schooling. I won gold medal for Kaduna Polytechnic at the 2004 NIPOGA Games in Bauchi, and while furthering my studies at Ahmadu Bello University, Zaria, I won gold medals back-to-back at the NUGA Games held at the University of Maiduguri and University of Nigeria, Nsukka, in 2005, 2008 respectively. I also have in my collections 2007 WAUG Games bronze medal won in Ghana and the 2008 WAUG Basketball Games silver medal held in Benin Republic.

I played basketball full time at Kada Stars from 2000 – 2015, and within my fifteen years sojourn with the club, I did not loose focus in my educational pursuit, up to the Masters Degree level. I was later promoted Coach/Player when a recurring injury abruptly ended my playing career. I was also made the head coach of the female arm of the club, GT 2000. At Kada 2009 National Sports Festival, I captained Team Kaduna basketball and we won the gold medal. I was also the coach to Kaduna state basketball team to the 2012 NSF held in Port-Harcourt, Rivers State, and we came back with the bronze medals in both male and female basketball. 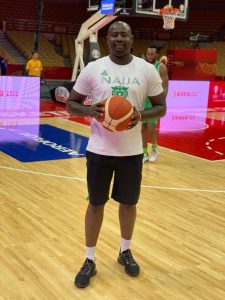 Q. The North West suddenly throw you into national limelight as its representatives on the NBBF board, four years ago. What are your antecedence that earned you this enviable trust?

A. What you are asking me was similar to the question I asked myself, four years ago, when I was to be nominated as the representative of the North West on the NBBF board that was dissolved last month. My findings was that, my modest contributions to the development of the game, which I didn’t know was huge in the reckoning of basketball stakeholders within the zone, was what made them added this worthy responsibility unto me.

Things like committing my hard earned resources and sometimes sourcing sponsorship to organise kiddies basketball clinics and camps, organising competitions and supporting basketball teams within the zone to attend competitions, which I was doing with pleasure, is what people saw and unanimously decided to endorse me as the zonal representative for the NBBF board. This is what I never dream about because, my thinking before was that such position was beyond me, as qualifications for such position may require certain pedigrees or credentials like age, financial and societal status etc, but here I am today, contributing and adding value to the development and running the affairs of basketball at the highest level, in the midst of notable Nigerian with giant feats in and outside basketball.

Q. How eventful was the tenure of your board?

A. If I may borrow your words, so far, it had been an eventful year for basketball in Nigeria particularly, on the positive side. We set out with massive successes recorded in the Afrobasketball women championship, which we won back-to-back in Mali, 2017 and 2019. The U-17 boys too, did not do badly, finishing second position in Tunisia, 2017 and at the 2019 edition in Senegal, Nigeria triumphed over the host. We went to Lome, Togo and won the 3×3, same for the Salamatu Mairiga U-18 boys 3×3 in Mali. D’Tigress also participated at the Olympics qualifiers in Belgrade and at the World Cup in Tenerife, Spain, loosing narrowly, to the world super power, USA team in the quarter finals, to finished number eight in the world. D’Tigers and D’Tigress qualified together for the Olympic Games. All these are great achievements recorded on the international scene.

At the home front, the board programmes ran successfully except for the distraction from a tiny clique, that temporarily stalled the men’s premier league, but at last, the Kida-led authentic NBBF board triumphed as the court ruled in our favour. Even with the distraction, we came up with the novel idea of The President League Tournament, to save the players from being match rusty. Royal Hoppers won and represented Nigeria at the African Basketball League in Rwanda. Another milestone recorded by the Engineer Musa Kida-led NBBF board was the five-year sponsorship of Total Division One and Two Basketball League.

Podium appearance by Nigeria basketball teams at Tokyo Olympics will be an icing on the achievements recorded by our board. I am very optimistic about this and D’Tigers especially, has rekindled our hope when they ran over Team USA, current Olympics champions in an exhibition game played at Las Vegas, Nevada. Significantly, the victory was the first for Nigeria against the Americans after suffering back-to-back defeat in 2012 and 2016. D’Tigers, forty eight hours after the record victory over USA, also defeated Argentina, ranked fourth-best team in the world 94 – 71, in another exhibition game.

A. This, I would say is not deliberate to shut any category of player out of the national team. Without holding brief for the team handlers, I think merit is the parameters that determines who make the team. If you recall the NBBF President, Engineer Musa Kida, in his inaugural speech dwelled extensively on grassroots basketball, an agenda every member of the Federation imbibed and took back to our different zones. The President specifically mentioned that home based basketballers would be accorded every opportunity they deserve to rub shoulders with their foreign counterparts and I can proudly say the Federation has done wonderfully well in this regard.

I can vividly recalled that four homebased players were part of the D’Tigers 2017 Afro basketball championship in Tunisia. Same applies for the D’Tigress, where the likes of, Nkechi, Nkem, Okoro and Tina, from the Zenith Bank sponsored female league made the team. Prior to the World Cup camping and preparations, a sizeable number of our home based players were invited to the camp and they gave a good account of themselves. Personally, I think the stalemate in the Nigeria Basketball Men’s Premier League, was a disservice that robbed the home based players the opportunity of being at same level with their foreign counterparts.

Q. You mentioned the distraction that stalled the Men’s Premier League, why was it difficult for basketball stakeholders to reconcile among themselves instead of resorting to court room?

A. The irreconcilable difference you are going back to, like I earlier said, is a mere distraction to our board. Now that a judicial pronouncement has put an end to it, all that is expected is for all genuine stakeholders of the game to close ranks for the good of the game. This, I assure you, would be on display at the next Federation elections.

Q. What value(s) did your representation on the NBBF board added to basketball in the North West zone?

A. I would have suggested you go round the zone for an independent assessment of my scorecard as their representative on the NBBF board but, since you have given me the opportunity, I will gladly grabbed it to blow my trumpet. I earlier told you how I earned the confidence of basketball stakeholders to represent the zone on the NBBF board, this from day one, do consciously brings to my memory that, I need to do more than I was doing with my meagre resources, contacts and intellect.

The state championships I normally organize receive a boost during my tenure on the NBBF board even. The youth camp targeted to ‘catch them young,’ where I invited notable coaches across Nigeria, were also stepped up across the zone. I also organised 3×3 competition within the zone. To address the disturbing trend where there are dearth of FIBA badge referees in the zone with Sokoto, Kebbi, Zamfara and Katsina states, not having a single referee to officiate basketball (not FIBA), I organised a referee refresher course early this year in Kano, with support of Alhaji Ibrahim Galadima, the Chairman, Kano State Sports Commission, KSSC, who graciously granted the use of the kofar mata indoor sports hall for the clinic. FIBA badge referee instructors were invited and they took fifty-six participants on refresher course such as how to handle the whistle, how to run on the court, and the rules of the game.

My imprint in terms of financial support to clubs in the zone that participated in NBBF organized competition, was the first of its kind in the zone.

Q. Can you confidently beat your chest that you have been a worthy representative that deserve another term on the NBBF board?

A. If I can do all that I catalogued as a first timer on the NBBF board, I will leave the rest to the stakeholders within the zone to decide whether I have kept fate with the trust they reposed on me or otherwise. If I can do this little as the youngest ever, in the anal of the NBBF board, I honestly deserve the backing of the zone in my return bid. I had identified lack of sponsorship as one of the bane of basketball in the zone and plans are already on, to attract notable sponsors for different categories of competitions, clinics/seminars at states and zonal levels.